November 10. Story of the Day: The Kitul Seeds

From Village Folk-Tales of Ceylon by H. Parker, volume 1, 26. You can read about Kitul (Kithul) plants at Wikipedia.

A certain  man and his son, who was a grown-up youth, were walking along a path one day, when they came to a place where many seeds had fallen from a Kitul Palm tree. 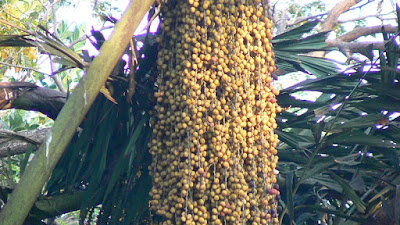 The man drew his son's attention to them, and said, "We must gather these Kitul seeds, and plant them. When the plants from them grow up we shall have a large number of Kitul trees, from which we will take the toddy (juice), and make jaggery (a kind of brown sugar). By selling this we shall make money, which we will save till we shall have enough to buy a nice pony."

"What!" said the father, " would you break my pony's back like that!" and so saying, he gave him a blow on the side of the head which knocked him down senseless.

There is another story of this type in the tale No. 53, below.

In the Jataka story No. 4 (vol. i, p. 19), there is a tale of a young man who acquired a fortune and became Lord Treasurer by means of a dead mouse which he picked up and sold for a farthing, subsequently increasing his money by careful investments.

In the Katha Sarit Sagara, vol. i, p. 33, a nearly identical mouse story is given.

In Indian Fairy Tales (Stokes), p. 31, there is a different one. A man who was to receive four pice for carrying a jar of ghi, settled that he would buy a hen with the money, sell her eggs, get a goat, and then a cow, the milk of which he would sell. Afterwards he would marry a wife, and when they had children he would refuse some cooked rice which they would offer him. At this point he shook his head as he refused it, and the jar fell and was broken.

In Indian Nights' Entertainment (Swynnerton), p. 23, a man who was carrying a jar of butter on his head, and who expected to get three halfpence for the job, was going to buy a hen, then a sheep, a cow, a milch buffalo, and a mare, and then to get married. As he patted his future children on the head the pot fell and was broken.

In The Arabian Nights (Lady Burton's ed., i, p. 296) there is a well-known variant in which the fortune was to be made out of a tray of glass-ware.

During the summer of 2018, I will be creating an anthology of chain tales, including cumulative tales, along with other intriguing styles of folklore repetition and enumeration. You can find the materials cataloged in the Thompson's Motif Index and the ATU Tale Type Index, with folksongs classified by Roud Number. I will be sharing a new Story of the Day here each day, and check the labels in the left-hand sidebar for different ways to browse the site. Enjoy! :-)


I've sketched out an open Canvas course space for future use: StoryLab, and if you have a story you would like to contribute, let me know. You can leave a comment here at the blog, or contact me by email or at Twitter:
laurakgibbs@gmail.com
@OnlineCrsLady

Laura Gibbs
Dedicatedly digital! Teaching online at the University of Oklahoma since 2002. Find out more at MythFolklore.net.